A potentially protean world builder for Urho3D and its forks. 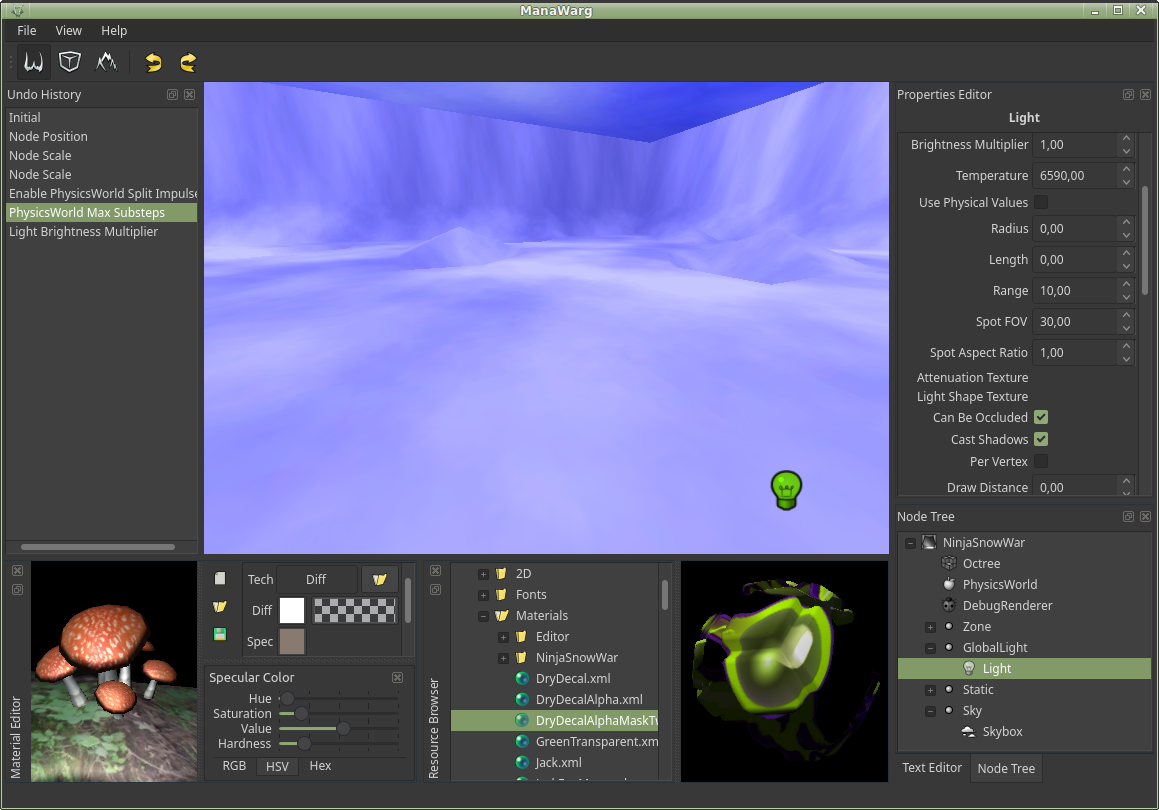 Looks neat. Can’t wait to see what people do with this. Heck, you said you’re still working on it? Just that fact makes this interesting.

Thanks, I started on it today. I gained some experience working on Edddy combining the two frameworks.

Now working on a material editor:

I like it. If you or someone else makes a full editor with this will it be merged with the rest of urho?

That is one of the goals I hope to help achieve.

…for Urho to have at least one native editor (in a separate repository).

I’m thinking it might not be such a bad idea to work towards a world builder that has different modes. Like a default mode (akin to current Urho editor), grid mode (like Edddy), terrain and planet mode. A bit like Blender’s UI layouts, but also changing the available tools and keycuts… like when changing the interaction mode in Blender.

Would be awesome if we could brush based map editing without needing to make our own editor/importer for an existing mapping software.

Have you seen the work by @JTippetts1?
Qt knowns tablet pressure.

By brush I mean like a BSP brush, like early ID tech or Source. I find it really useful for blocking out prototype levels.

Ah, that would also make an interesting mode that I overlooked indeed. You’d basically be building custom geometry, right? When it comes to BSP I’m more familiar with the early Unreal approach ; the tunneling variant. But I guess that’s basically a difference in normals.

If you really need an idea of the workflow and you have Quake I’d suggest checking out TrenchBroom. Really good tool that I think is a really awesome example of what a modern quake-like level editor should look like.

@GoldenThumbs I intend to focus on the part that “works like Edddy” and hope there will some day be contributions from people like you (mr BSP mode) and @JTippetts1 (mr Terrain mode).

This project grew mainly out of my discovery of the QDockWidget. They can be tiled, stacked, floated and closed which allows for a great deal of variety in possible UI layouts.

How does ManaWarg sound as a name for this magimythical colonial organism?

Would you accept it as a name of the next official Urho editor?

The M and G are a bit hard to read. I saw them as N and Q. But the logo itself is good

Indeed, as first scribble, it could use some balancing out. Also his tail should be stringier; less fart-like.

I think this will guide the next version of the logo as well.

4 posts were split to a new topic: The Urho3D logo

The fish is now alive with that logo.
Looks great.