Some small stuff here as I was just messing around with the default terrain, I got a bit of detail and color map added to improve the terrain visuals up close and from a distance. Still a work in progess with the height or elevation modified to shorten the process and generate a 2048x2048 color map.

Color and Detail map only 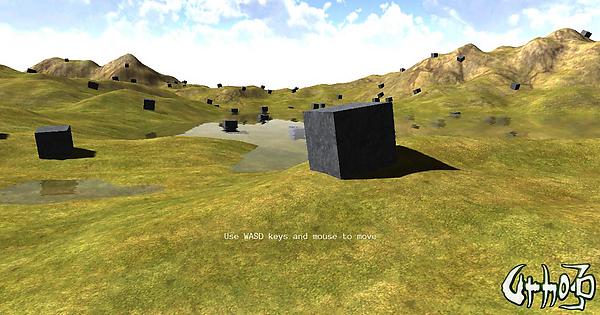 Well, surely it looks better than default ones!

Proposed for entering next release!

I think, this terrain should replace default one in Urho3D samples.

With some modifications to the cubes, could take on a eerie, alien look…

Our Flintstone-mobile would maybe require an upgrade then. I agree it’s prettier, but quite a bit more hilly too.

As for other media like these replacement diffuse textures, it was a quick test so I have used L3DT to generate color maps out of its base textures and the modified heightmap. I have used the Temperate climate set on this setup and apparently the license prohibits redistribution of its base textures, so I’ll just find other alternatives that has either Public Domain or CC license when it is ready for PR or release.

Our Flintstone-mobile would maybe require an upgrade then. I agree it’s prettier, but quite a bit more hilly too.

Yes with some tweaks I think this is also possible.

You can pack grayscale maps into channels of an RGBA texture and get the mixed value pretty easily.

Light-weight enough that you could also get an analytic normal from it with additional samples.

Where would PackedDetailTextures come from? I imagine i have a single texture, a splatmap, where each channel contains a different material definition: sand, grass, rock and snow (R, G, B, A). I use those as masks to apply 4 different channels in my terrain. Each material contains 4 textures: diffuse, specular, normal and detail.

Like that? So, if i want specular/normal, i just have to load up more texture units and load the respective maps?

You can also use texture arrays to allow for more textures.

You can do this manually (send a large texture to the shader which contains multiple textures), or using the TextureArray feature.

How to use Texture2DArray? Support

I use it in my custom terrain shader to provide 8 (or more) different terrain detail textures. In GLSL: uniform sampler2DArray sDetailMap2; Then, in the pixel shader, to sample it use: texture(sDetailMap2, vec3(vDetailTexCoord.xz, 1)); // To index texture at array location 1 In HLSL: Texture2DArray tDetailMap : register(t2);; SamplerState sDetailMap : register(s2); In pixel shader: tDetailMap.Sample(sDetailMap, float3(iDetailTexCoord.xz, 0)); // To index texture at array location 0 The…